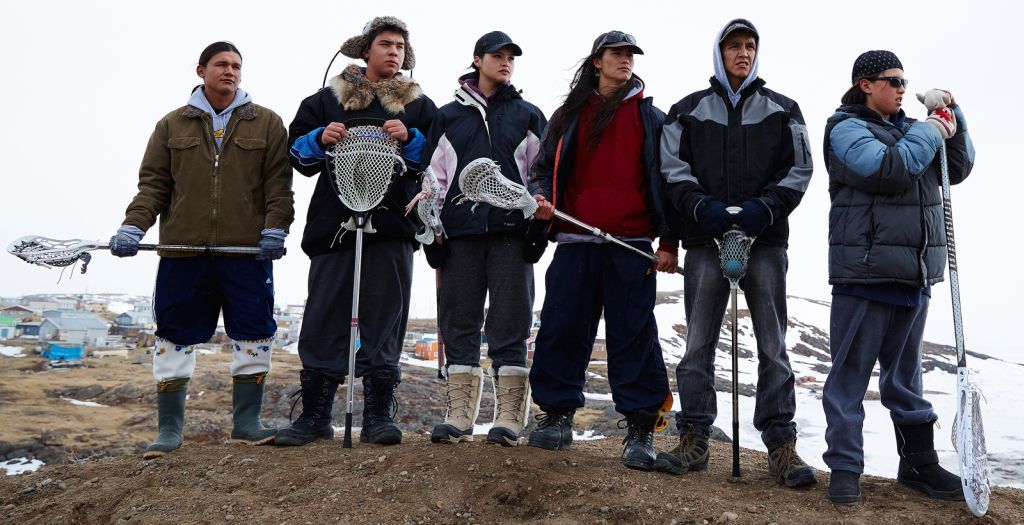 The life lessons & lacrosse mix in the sport drama The Grizzlies

Director Miranda de Pencier delivers an impressive debut in the inspirational sports drama The Grizzlies from Elevation Pictures. Based on a true story, the film opens with a heartbreaking suicide of a young teen in a remote arctic town in North America. Before long, we meet the fresh out of college and aspiring teacher Russ Sheppard (Ben Schnetzer). Russ has taken on what he perceives as a place holding job, teaching history at Kugluktuk High School.

Russ’s colleague and fellow teacher, Mike (Will Sasso), informs him that only two people come to the town. Those who are looking to escape something or those who couldn’t find anything better. Naturally, Russ is taken aback by the disrespect of the student’s in his class, the town’s cost of living, and the conformity to their way of life. Before long, Russ realizes that he can use lacrosse to inspire the students. Naturally, there’s an opposition from the school’s principal (Tantoo Cardinal) and some of the students, including the school’s ring leader Zach (Paul Nutarariaq).

Together as “The Grizzlies”, the players learn to lead each other, gain the support of a deeply divided town, and look to compete in the National Lacrosse Championships. The students ultimately discover that their success doesn’t just lie in the outcome of a lacrosse game.

One of the first things I noticed about Graham Yost’s and Moira Walley-Beckett’s script for the film is the respect it pays to Kugluktuk, Nunavut. The filmmakers show us characters using their native tongue, in addition to their hunting methods and way of living. Inscriptional sports films are one of the most common genres in cinema. Usually, whenever there is a white teacher and minority students the film can fall into the white savior tropes.

You won’t find the coach dancing to Hip Hop or classical Motown music with his students. Instead, this is an unflinching and grueling film. An outsider must understand that for some of these kids, skipping school to hunt is the only way they can provide for their family. One of the strongest arcs in the film is Kyle (Booboo Stewart), a fast-paced runner from an abusive home, whom Russ takes under his wing. I also found a lot to like in Ben Schnetzer as Russ Sheppard, who slowly goes from outsider to a likable character.

The cast, primarily composed of Canadian actors, all do well in their roles. The only two faces I recognized were Booboo Stewart and Will Sasso. The use of unknowns allowed me to identify with each character more. When a tragedy befalls someone on the team, it hits home.

The lacrosse action is also impressive, as are the practices while we watch the team build strength and confidence.

I will point out that if you’re expecting a happy go lucky sports film, then you may want to avoid The Grizzlies. While the film does eventually become uplifting, it’s dark and a true to life viewing experience to get there. The film explores alcoholism, teen suicide, domestic abuse, and even classism. For those reasons alone, I would say the movie may make younger viewers uncomfortable.

The Grizzlies is a different take on the traditional sports drama. More about understanding other cultures and their survival, the film succeeds with its mixture of lacrosse and the Canadian lifestyle.

The Grizzlies will be available to view on all streaming platforms Tuesday September 15th.