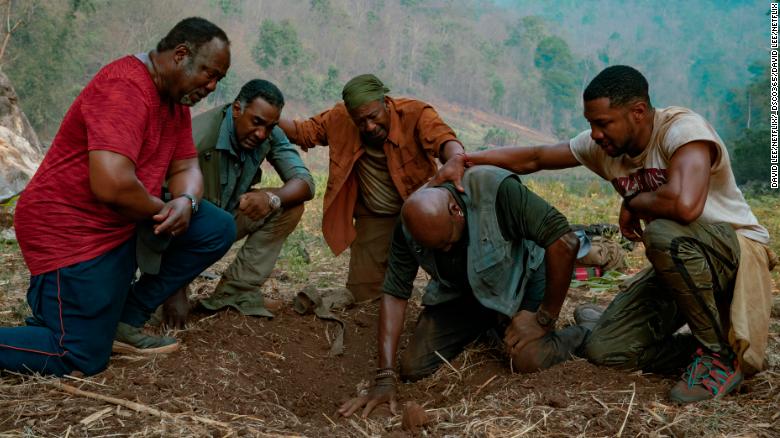 Spike Lee’s latest project Da 5 Bloods arrives on Netflix Friday, June 12th, and adds another entry to the director’s already impressive filmography. The film’s production goes back to 2013 with director Oliver Stone at the helm. Initially, a spec script by Danny Bilson and Paul De Meo titled The Last Tour.  Following 2008’s Miracle at St. Anna, Da 5 Bloods is director Lee’s second war film. Lee could’ve taken the commercial route and just made a modernized adventure heist film in the vein of John Huston’s The Treasure of the Sierra Madre. Instead, Lee who reunites with his BlacKkKlansman co-screenwriter Kevin Willmott give us a tale highlighting the black experience of soldiers in Vietnam.

The film opens with archival footage of Muhammad Ali’s speech, where the greatest explains his opposition to the Vietnam War and his refusal to enlist to fight. The opening Ali footage provides the perfect Segway into Lee’s central plot of the film. Da 5 Bloods tells the story of four veterans who return to Vietnam to locate the remains of their squad leader, Norman (Chadwick Boseman), for a proper burial.

Two of my favorite moments in the film involve Clarke Peter’s, Otis. The first involves Otis reuniting with a former love Tien (Le Y Lan). The dialogue between the two during the revelation of a secret succeeds with tact. The second moment involves Peter’s humorous yet though-provoking tangent on the lack of diversity in Hollywood led war films from the eighties. Naturally, the Chuck Norris led Missing in Action, and Sylvester Stallone’s Rambo both receive criticism. Lee uses the moment to highlight Milton L. Olive III, the first African-American Medal of Honor recipient of the Vietnam War.

The rest of the cast all provide excellent work and all into their character with ease. As Paul, Delroy Lindo gives an Award-worthy performance as Paul the temperamental hothead who wears a “Make America Great Again” hat. The film doesn’t spend a lot of time focusing on Paul’s reasons for supporting Trump, which is fine; instead, we have a man who is still haunted by his military experiences.

Isiah Whitlock, Jr provides humor in the film when needed, and theater actor Norm Lewis balances the group out with his charm. I also enjoyed Jonathan Majors as David and was able to identify with his issues with his father.

I must let readers know that Chadwick Boseman has a small role in the film, maybe a total of twenty minutes of screen time. However, Boseman’s role is pivotal and eschews Black Pride in the way he leads his squad. One of Boseman’s best moments in the film is a motivational speech to the team after they learn of the assassination of Dr. Martin Luther King Jr.

Music always a pivotal role in the film of Lee, and this one is no expectation. Long time Lee collaborator, Terence Blanchard, provides the score, while selections from Marvin Gaye’s What’s Going On album fill out the rest of the soundtrack. I can’t think of the last time I heard Gaye’s “What’s Happening Brother,” used on screen.

As much I enjoyed the film, I did find the Jean Reno character of Desroche a shady businessman un-needed and predictable. The moment he appeared on screen, even my eleven-year-old son was able to figure out how his arc. The same sentiment holds for the trio of Paul Walter Hauser Mélanie Thierry, and Jasper Pääkkönen who don’t have that much to do. Some viewers may also get turned off by the actors portraying by both the young versions and old versions of their characters.

When the 2 ½ hours run time of the film reaches its closing, Lee gives us archived footage of Dr. King’s “Beyond Vietnam” speech and closing text reveals that King’s murder would occur a year later to the date. It’s a gut punch that lets us know even when you try to be peaceful, someone will attempt to bring you down.

Da 5 Bloods has a lot to say, and the film generally succeeds as a combination of a war film, race relations, and history lesson, Da 5 Bloods is worth the watch.