Two-time Academy Award nominee Carey Mulligan and Zoe Kazan star as New York Times reporters Megan Twohey and Jodi Kantor, who broke one of the most important stories in a generation. A story that helped propel the #Metoo movement shattered decades of silence around the subject of sexual assault in Hollywood and altered American culture forever.

Naturally, other life people appear in the film in supporting roles. They include a voice-only performance from Mike Houston as Harvey Weinstein, Ashley Judd as herself, Anastasia Barzee as Lisa Bloom, the American attorney who was an advisor to Harvey Weinstein during the allegations, and Andre Braugher as Dean Baquet, the executive editor of The New York Times. Additionally, two names I needed to familiarize myself with played a part in the story. Samantha Morton and Jennifer Ehle portray Miramax employees Zelda Perkins and Laura Madden.

I’m a sucker for true stories, so She Said was right up my alley. The ensemble is led by the impeccable Carey Mulligan and Zoe Kazan, whose playing is entirely different from what one might expect from a traditional orchestra. Andre Braugher and Patricia Clarkson embody their role models’ professional attitudes with ease and naturalness. For fun, Mulligan and Kazan call themselves ‘reporting twins’ and speak on the subject rationally and humanely. All actors are strikingly similar to their role models.

The film stands out for its well-edited, well-balanced approach, adding to its credibility. I was incredibly impressed by Ashley Judd’s performance as herself, a victim of Weinstein, or Natasha Braier’s precise, unsentimental camerawork. Twohey and Kantor’s article was published in the New York Times in 2017. As a result of research for the article, Harvey Weinstein had already withdrawn from all stores.

The film rights to She Said were already acquired before the book saw publication in 2019. A year later, the book was released as a book. Almost nine months after Harvey Weinstein was sentenced to his first 23 years in prison, filming for the movie began in the spring of 2021. There was also a devastating blow to the entire industry of neural positions due to this event.

Regretfully, She Said was unnoticed when it was in theaters this past fall. Nevertheless, let us hope the film finds an audience in the home market.

She Said is available on numerous streaming platforms now.

Director Zach Golden transitions to the action genre for his sophomore feature, High Heat, from Saban Films. Screenwriter James Pedersen makes his debut with the film. Former KGB operative Ana (Kurylenko) has left that life behind and turned chef. 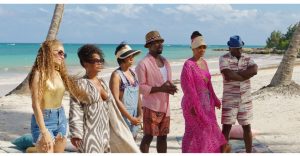