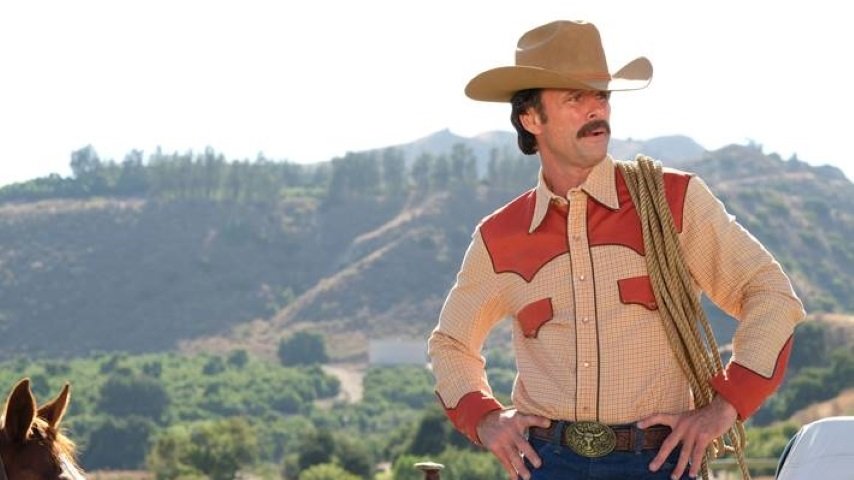 Walton Goggins shadows his inner “Texan” in director Jake Szymanski’s short film, John Bronco. A mockumentary about the history of the Ford Bronco is a hilarious look at the world of advertising and celebrities. Some have said that if you were famous before the internet, you might as well have never existed. Such is the case for John Bronco, the greatest pitchman who ever lived. In 1966, Ford tapped him to race their new prototype SUV at the Baja 500 in Mexico.

Not only did he win, he also gave a rousing speech that rallied a nation. Legend has it that Ford named the new SUV “Bronco” after John, then made him the face of their campaign which skyrocketed him to stardom. His commercials were on every channel, and his jingle went triple platinum. John even launched his own cologne, breakfast cereal, video game, action figure, you name it. He was the very embodiment of the American dream that is until it all came crashing down.

The script for John Bronco is razor sharp and quite humorous. One of my favorite jokes involves pies and the actor Brad Pitt, along with a few other surprises. Gilbar makes the wise choice to utilize stock footage of real-life pitchmen such as Kareem Abdul –Jabber (playing a Meta version of himself) in his showcase for the power of advertising. John Bronco’s jokes work off the strength of other’s reactions to Bronco’s pitches.

However, the short film belongs to Walton Goggins. The actor was always versatile with his acting choices. Still, here, he’s just having fun, and I wouldn’t mind seeing the actor reunite with the director and writer for a full-on hard R comedy in the future.

At its core, John Bronco may come off as an extended Funny or Die sketch, which is fine, as there’s just enough laughs to keep you entertained for the short film’s run time.

Final Grade B – John Bronco is streaming on Hulu now.