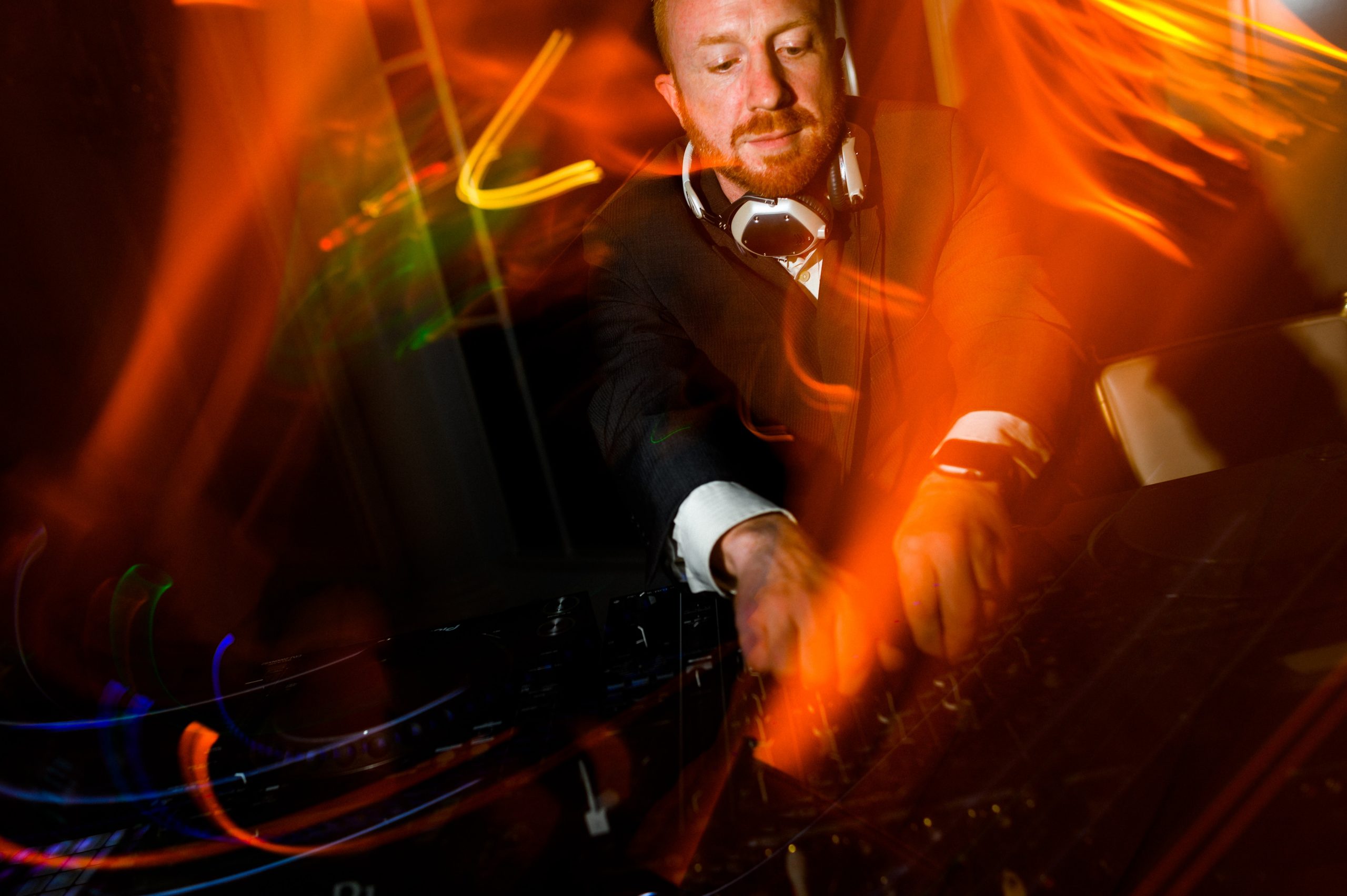 In The Mix with DJ Craig Wood

Reviews & Dunn had a chance to sit down with 2019 Best of the Knot & seven time Wedding Wire Couple Choice Award Winner DJ Craig Wood to discuss his company Perpetual and the art of being a DJ. Check out our interview below

Reviews & Dunn: When did you start Djing and who would you consider your influences?

DJ Craig Wood: It all started about 20 years ago. I had fallen hard for electronic music and the rave culture in general. I had a strong musical background having played several instruments so I had fundamental understanding of what DJ’ing was all about. I just needed to take the plunge and save for a pair of decks. For the sake of name dropping, DJ’s/producers such as Terry Mullan, Carl Cox, Sasha/Digweed and local-turned-national guys like Charles Feelgood and Scott Henry really struck a chord with me. If I had to narrow the list down, I’d say a three-way tie between Bad Boy Bill, DJ Dan and The Chemical Brothers. Watching Bad Boy Bill rip through mixes at warp speed while fusing in some master-level turntablism is a treat for the eyes and ears. DJ Dan is a fantastic producer and, pardon the cliché, tells a great story with his sets, both live and recorded. If you’ve never caught The Chemical Brothers live, I would encourage you and anyone else to do so. These are definitely the ones who gave me the DJ itch I had to scratch when I first cut my teeth.

Reviews & Dunn: We’ve all heard about legal troubles regarding Michael Jackson, R. Kelly and Chris Brown. Have you ever found yourself in a moral compromise, when it comes to playing their music?

DJ Craig Wood: This is actually a phenomenal question. As a result of their respective falls from grace, I make it a point when talking with my couples or clients to discuss what their thoughts are. While I have my own take on these guys, my job is to keep those who booked me happy and comfortable. If their preference is for any or all of them to be placed on a Do Not Play list, I always oblige, without question. I can say with the utmost certainty that I don’t nearly play the amount of R. Kelly/Chris Brown that I use to per the request of those booking me. MJ is still in play, though it’s primarily Jackson 5 or early MJ, a la tracks from Off The Wall and not nearly at the volume of plays from, say, five years ago.

Reviews & Dunn: What is one of the most random songs a client or customer has ever requested that you play during a set?

DJ Craig Wood: Man, if I had a dime for every “unique” song request I’ve received over the years I’d be diving in a tower full of money a la Scrooge McDuck! One that comes to mind was a heavily intoxicated guest who swore up and down that if I dropped some Iron Maiden the dance floor would go wild. I like Iron Maiden. Iron Maiden at a wedding…not so much. I politely turned down his requests…I say requests because my man came up to me with the same request about six times, he was so hammered he kept forgetting he had the conversation with me several times already. The other request I remember getting was this insane song by Detroit Grand Pubahs, Sandwiches. It was a track that I was impressed someone requested because it’s way off the beaten path, I actually still have it on vinyl. That request was denied as well because the song…well, you just have to hear it to understand.

Reviews & Dunn: As a DJ, do you have more fun doing nightclubs, weddings or social events?

DJ Craig Wood: They each have their own allure about them.

Nightclubs are great because you usually know what you’re getting yourself into when it comes to the demographic of the crowd and the kind of genre(s) they’re into. It also depends on your role. If you’re headlining or the only DJ for the night, you’ve got complete control. If you’re an opening act or playing right before the headliner, my job is to prime the crowd for them. I’m not going to be playing a ton of bangers, I’ll start off low-key, and let things build up for the main act to take over.

Weddings require a lot more work, as I’m wearing many different hats: I’m consulting with the couple in helping them plan out the music for all the parts of the day (ceremony, first dance, etc.), providing multiple audio system/wireless microphone setups and have to emcee in a manner that’s fun and classy, not cringe worthy. You also have the challenge of pleasing a diverse group of people on the dance floor since you’re catering to guests of all ages early on. It’s a balancing act of playing the right songs at the right time to please everyone without causing ear fatigue or boredom. I’ve fine-tuned my craft over years to adjust to any situation and call an audible as needed, no matter the demographic.

Corporate/social events can differ dramatically. If I’m DJ’ing for an in-store promo or an expo/convention, I’m playing songs to keep the energy in the room going to keep people moving around, which is great because I have a ton of creative freedom. The expectation isn’t necessarily for a dance party to erupt (though it does happen), rather, my job is create atmosphere. Holiday parties and private events are similar to weddings as there is some protocol. A CEO may want to give a speech or there could be some raffles. Eventually, everything leads to everyone in the company hitting the dance floor after lots of cocktails.

Reviews & Dunn: What can you tell me about your company Perpetual Sound?

DJ Craig Wood: Perpetual Sound started several years ago as a means to legitimize my business. I felt the name was appropriate as my role is to keep the music continuously flowing throughout the event, no matter what said event is.

Reviews & Dunn: I’m a former DJ myself. Back in 2005, when I was stationed in the UK, I had a chance to see the legendary DJ Jazzy Jeff use Serato for the first time. I was ready to retire after seeing the way he owned the crowd with just two turntables and a laptop. Has Serato changed the game for DJ’s?

DJ Craig Wood: I’d say that Serato/Traktor really changed things up with their respective apps and timecode vinyl implementation. No longer do DJ’s have to lug around a bunch of heavy ass crates or risk have them lost at the airport. The technology has advanced tremendously, to a point where latency isn’t a factor. Having said that, while I did start off with Traktor I’m actually a Rekordbox/Rekordbox DJ user myself, as I’ve always used Pioneer products in conjunction with their software. Even when I was running a pair of Technics prior to getting my CDJs, I always had a Pioneer mixer in the rig. I just find Rekordbox gives me unparalleled freedom when it comes to tagging, categorizing, sorting, filtering, etc. The CDJ setup also gives me the flexibility to play with or without a laptop, having that redundancy is clutch, especially when it comes to high-end events. Its management is second to none. It’s not without its problems, but it’s what I’m most comfortable using.

Reviews & Dunn: Do you feel that the art of scratching and beat juggling is lost on Generation Z and Generation Alpha?

DJ Craig Wood: Not at all. The DMC Championships and similar turntablist driven comps are alive and well. I keep seeing the competitors getting fiercer, coming up with all kinds of crazy routines. These young bucks are hungry.

Then you have the guys on YouTube with these elaborate live routines using MPC, Launchpad, etc. and it gives me the feeling that this next generation is going to be just fine. Of course, if I were to have my “old man shaking his cane on his porch” moment, it would be to say I hope that anyone interested in becoming a DJ would take the time to listen to the classics and work hard/save up for a set of turntables. This isn’t because I’m anti-sync button or anything silly like that. Rather, I feel it’s the best way to learn how to mix with your ears and react accordingly without having to rely on staring at a waveform on a screen. It’s great training for the ears. That’s just my opinion, not preaching by any means, to each their own.

Reviews & Dunn: If you were stuck on a deserted island what three albums you would listen to pass the time until you were rescued?

DJ Craig Wood: This is like asking me to choose my favorite kid. If you’re twisting my arm, here’s three in no particular order:

Reviews & Dunn: I’m a big fan of musical biopics. If Hollywood ever does the story of Grandmaster Flash which actor would you pick to portray him?

DJ Craig Wood: Wow…this is a tough one. Off the top of my head, I could see Yasiin Bey (Mos Def) or Daniel Kaluuya in the role.

Reviews & Dunn: In your opinion what are three essentials tips that a producer starting out should know before making a song?

Reviews & Dunn: Where can your fans and potential clients find you on social media?

DJ Craig Wood: I can be found on the interwebs here: