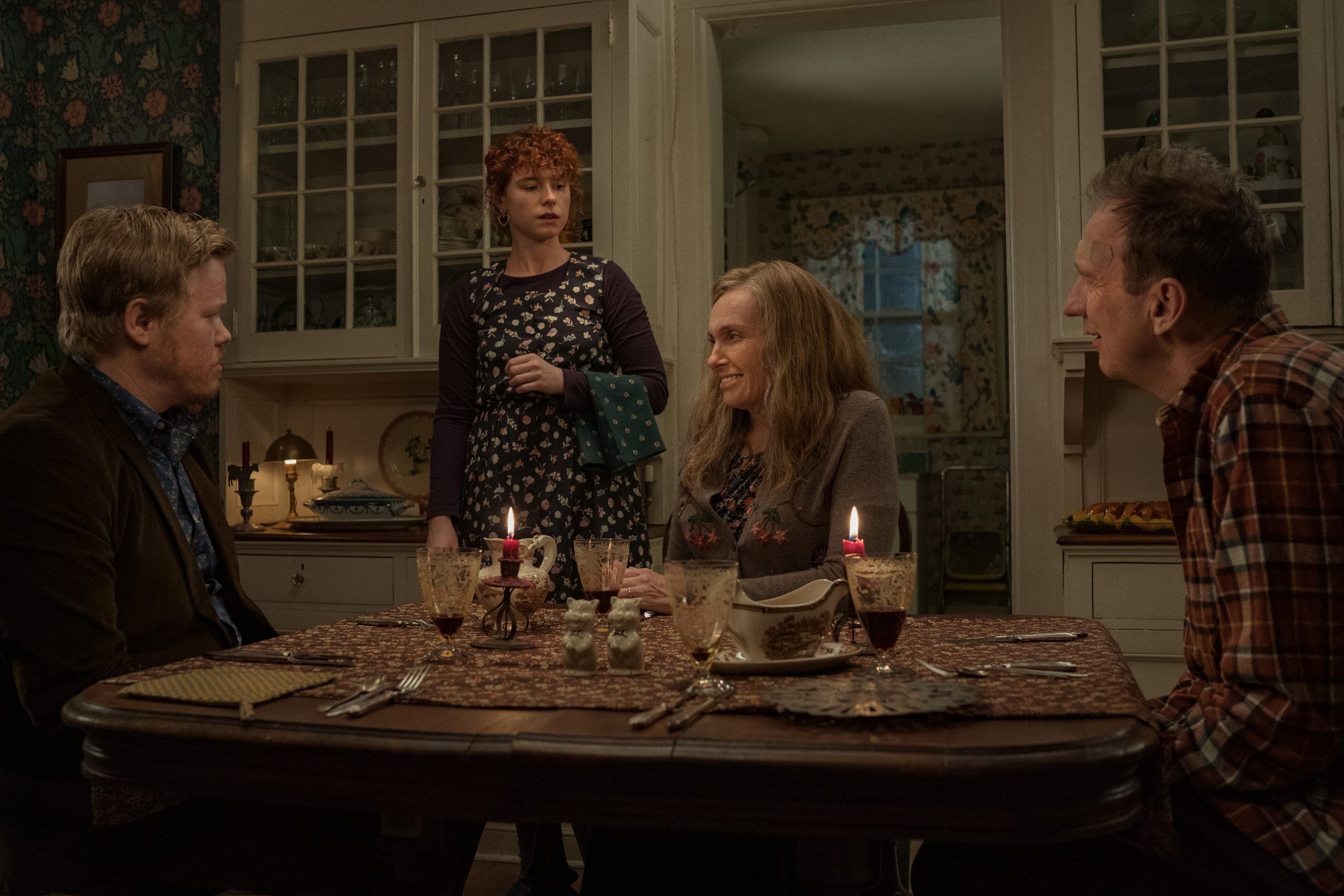 Ian Reid’s best-selling novel I’m Thinking of Ending Things, gets a Netflix adaptation from director Charlie Kaufman. A nameless young woman (Jesse Buckley) and her boyfriend Jake (Jesse Plemons) are on a road trip to meet Jake’s parents Suzie (Toni Collette) and Dean (David Thewlis). Jake gives Young woman a fair warning that his family is quite eccentric, which only adds to the hesitant reservations he had about the trip.

Not to mention, there is a snowstorm taking place, and the last thing the young woman wants is to get stuck on Jake’s parent’s farm. Naturally, the dinner does not go as planned, and the young woman begins to question her sanity and the reality she is living in. Throughout the film, we hear the young woman’s ominous voiceover, where she repeats, “I’m Thinking of Ending Things.” Confused yet, because once the credits rolled on, I’m Thinking of Ending Things; my wife and I had no idea what we just watched.

There is an old adage that the book is always better. Generally, I avoid reading books from an author I don’t follow before seeing the film adaptation. During the novel’s initial run, a fellow critic had just finished the book, and I asked him if it would make a good film adaptation. Naturally, he replied yes, and given his praise; I was looking forward to the film. Instead of reading the book beforehand, I took the time to read the cliff notes of the book’s summary to try and understand it a bit better.

Charlie Kaufman’s writing style is one I have always liked. Additionally, I have even found little subtle things to enjoy in Kaufman’s previous two directorial efforts. However, with I’m Thinking of Ending Things, the conscious is that Kauffman is telling his own story and not a full-on adaptation of the novel. The film does start off promising enough, and the dialogue moments between Young woman and Jake is something anyone who was going to their significant other’s parents for the first time can relate to. Jesse Plemons, Toni Collette, and David Thewlis all provide their usual acting styles. Toni Collette and David Thewlis can do roles like this in their sleep, so I did not expect anything less.

On the other hand, Jesse Plemons usually plays secondary characters, so it was great to see him in a lead role. Buckley, whose work I was not familiar with, is also charming as a young woman. Buckley carries the film as our mental capacity continues to go, and we watch her slowly unfold. Watching Buckley’s performance reminded me of a young Mia Farrow from Rosemary’s Baby, and would love to see her in a horror film.

I intend to read the novel and view the film again with more of an open mind. Twenty years ago, I would have rated I’m Thinking of Ending Things as one of the worst films of the year due to its confusing tone, particularly the images of a nude senior citizen chasing a talking pig. However, the 39-year-old me realizes that just because a film is not for me does not necessarily make the movie a failure.

I’m Thinking of Ending Things is not a terrible film; instead, it is an anomalous look at life through an atypical director’s eyes. I do not recommend the films to mainstream audiences looking for a spooky good time as the trailer suggests, as they will be sorely disappointed. However, fans of Charlie Kaufman’s work and the novel should find something to enjoy.

I’m Thinking of Ending Things is available to stream at www.netflix.com/imthinkingofendingthings