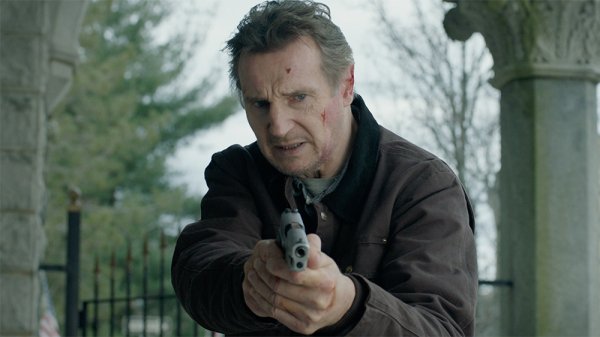 Liam Neeson returns to the action genre in Open Road Films, Honest Thief from director Mark Williams. Tom Carter (Neeson) has just moved to a new city when he meets Annie Stumpter (Kate Walsh) while purchasing a storage unit. The two hit it off and end up dating for the next year, culminating with Tom wanting Annie to move into the new home he’s purchased. However, Tom has a secret past life as a non-violent bank robber known as the “In-and-Out Bandit.”

Wanting to start fresh with his new lady love, Tom decides to turn himself into the FBI and reaches out to Sam Baker (Robert Patrick). Thinking it’s a hoax, Baker sends agents Nivens (Jai Courtney) and Hall (Anthony Ramos) to investigate. Seeing a chance to pocket the $9 million Tom has stolen over the years, Nivens and Hall decide to double-cross Tom. Realizing he’s been set up, Tom is forced to go on the run to clear his name.

It’s been twelve years since Irish actor Liam Neeson found a career resurgence as an action star, starting with the film Taken. Some movies were a bit better than others, but the actor has always delivered a quality performance. Steve Allrich’s & Mark William’s script for the film follows the same template established in previous Neeson films.

Neeson portrays a likable everyman who has a particular set of skills acquired over a very long career. One of the things viewers will notice different about this film is that Neeson’s butt-kicking scenes actually takes a back seat to the drama this time around.

While there are action sequences in the film, Honest Thief doesn’t give Tom Carter plot armor. At the age of 69, while Neeson is still in shape, it was refreshing to see the actor use his wits and brains instead of a gun and his fists.

Even during the scenes where Carter engages in fisticuffs with the antagonists, the fights are believable and never come across as one-sided victories for our hero. In terms of acting at this point, Neeson can walk through a role like this in his sleep, which is fine, since he’s good as an action hero.

Outside of Kate Walsh, as Tom’s love interest, the supporting cast really doesn’t have much to do, other than to serve as place holders. Robert Patrick’s role as an FBI agent isn’t anything we haven’t seen do him before. Simultaneously, the usually reliable Jai Courtney seems to only be in the film for a paycheck. Courtney’s character of Nivens is vastly underwritten, and his motive for wanting to double-cross Tom comes off as forced.

The same plot point befalls Anthony Ramos’s character of Agent Hall. Known primarily for his dramatic work and singing career, the part of a bad guy just doesn’t fit Ramos. While I love seeing Ramos on screen, I feel that his character traits should’ve been swapped with Jeffrey Donovan, who portrays a clean FBI agent. Donovan has a history of playing bad guys and would’ve had better chemistry with Ramos, in my opinion.

Liam Neeson has cashed numerous checks breaking the necks of bad guys over the years. Honest Thief is another addition to his already impressive resume. Despite the predictability and my issues with Tom’s closure, I still recommend the film as a quick time waster.