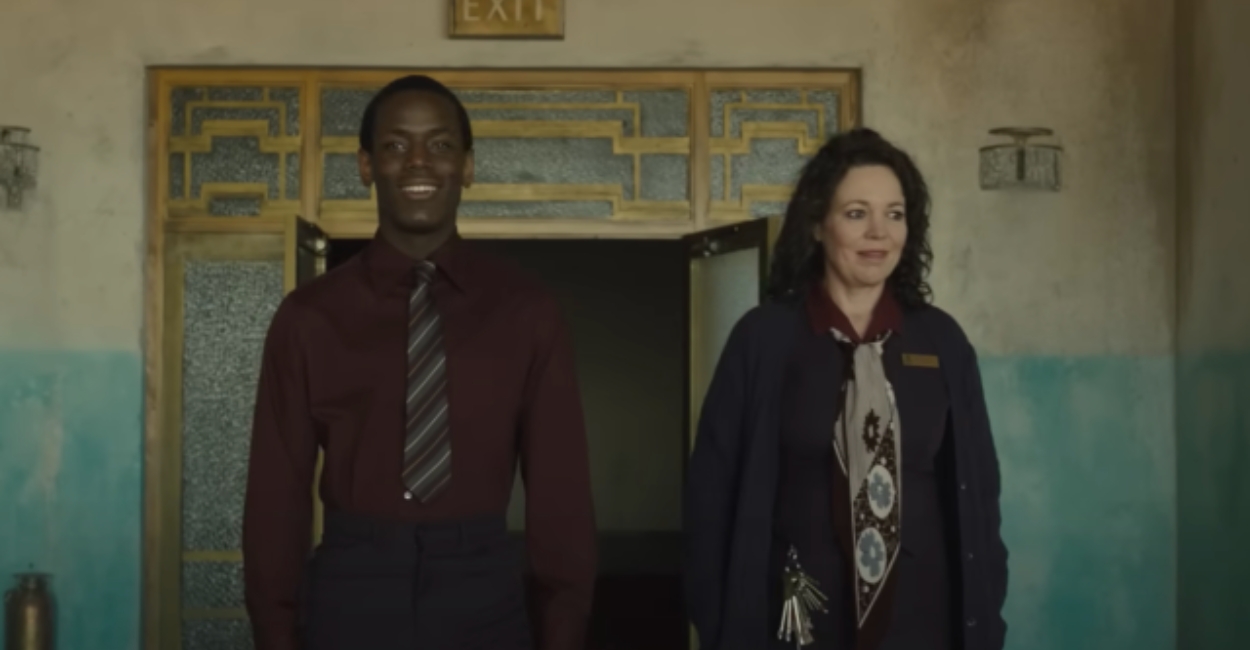 The film takes place in and around a faded old cinema in an English coastal town in the early 1980s. Empire of Light introduces us to Hilary (Olivia Coleman), a cinema manager struggling with her mental health.

Hilary spends her days taking ticket stubs, offering fake smiles to customers, and occasionally engaging in trysts with her boss Mr. Ellis (Colin Firth). The other employees at the theater include ticket takers Neil (Tom Broke) & Janine (Hannah Onslow) and, naturally, the projectionist portrayed by the always enjoyable Toby Jones.

One day, a new black employee, Stephen (Micheal Ward), joins the team. Possessing a boisterous outlook on life, he longs to escape this provincial town where he faces daily adversity. Hilary and Stephen find a sense of belonging through their unlikely and tender relationship and experience the healing power of music, cinema, and community.

Surprisingly Empire of Light wasn’t on my radar this awards season, and I had just heard of the film when I got the screening invitation. More often than not, when I go into a film blind, the results are positive. So how does Empire of Light measure up? Honestly, it’s a mixed bag. But I will begin with the good, particularly the score from Trent Reznor and Atticus Ross.

I commend Mendes for handling their chemistry organically and not as some fetish, considering the May-December vibe and the prominent different racial backgrounds. Mendes’s script treats the characters as natural people who start as friends that naturally builds into something more. Oliva Coleman delivers another satisfactory performance, while newcomer Micheal Ward has a breakout presence that I’m sure will garner notice from other filmmakers.

The problem for the film arises in the third act. Mendes’s narrative choices with his script differ from the tone he set forth earlier. On the one hand, there is a scene that may serve as Coleman’s awards clip, but the shift didn’t work for me sonically as a whole. There’s also a moment involving Stephen; had his fate gone a different route, my final grade for the film would go lower. In addition, when we get two other black characters in the film, Stephen’s mum and his friend, the effect doesn’t land.

It’s no secret that cinema is a dying art form, as many folks prefer to stream. Mendes’s film is most vital when it focuses on that aspect. Case in point, two of my favorite movies in the Empire of Light involve movies and Stephen. The first scene involves Stephen’s excitement for the classic comedy Stir Crazy. The second occurs when Toby Jones shows Stephen how to project a film. I wish Mendes had taken this route for the entire movie.

Despite some visually beautiful cinematography and fine performances from the cast, Empire of Light’s mixture of themes ranging from racism, mental health, and romance don’t come together the way Mendes intends.