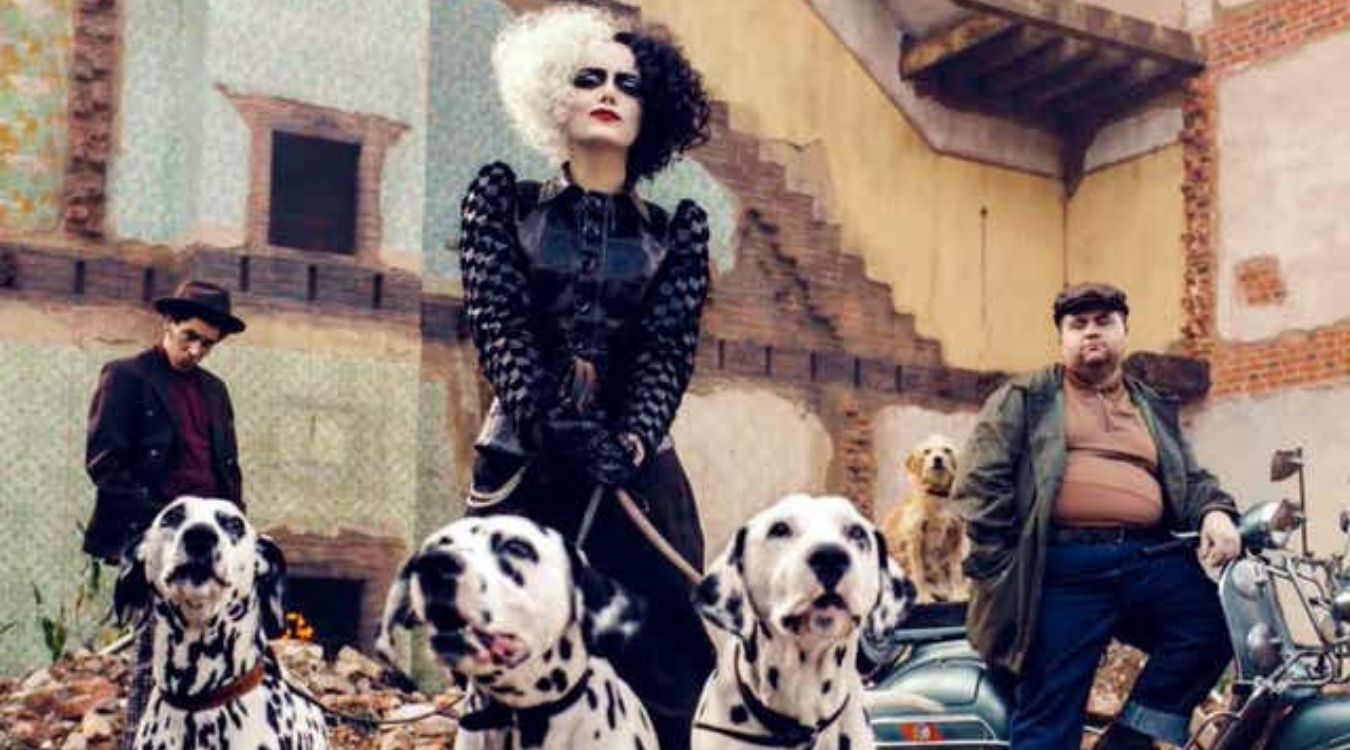 An iconic Disney villainess gets a spin-off film in director Craig Gillespie’s Cruella from Walt Disney Pictures. The film focuses on the rebellious early days of the notoriously fashionable Cruella de Vil (Emma Stone), who was born under the name of Estella. The film opens in 1960’s England, where a young Estella is born, and over the film’s opening moments, it is clear that she is different from her peers. There are few moments in the film that focus on Estella as a toddler. Still, the fun for me began when 12-year-old Estella (Tipper Seifert –Cleveland) enters the scene. Without going into detail, let us just say that the young actress fully taps into tween angst.

Estella links ups up with young pickpockets Jasper and Horace through a series of events, who appreciate her appetite for mischief. Together the trio builds a life for themselves on the London streets. Cruella then cuts to 1970s London amidst the punk rock revolution and finds Estella (Emma Stone), a clever and creative girl determined to make a name for herself with her designs.

One day, Estella’s flair for style catches the eye of flash legend Baroness von Hellman (Emma Thompson). While the Baroness is devastatingly chic, she is also terrifyingly Haute. However, their relationship sets in motion a course of events and revelations that will cause Estella to embrace her nasty side and become the raucous, fashionable, and revenge-bent Cruella.

Let us start with the good, which begins with the fabulous Emma Stone, who is excellent as Estella. I particularly enjoyed the arc that writers Dana Fox and Tony McNamara create for the character. Stone’s natural charm can elevate the material above its simplicity and is having a great time playing bad. I also loved Emma Thompson as our antagonist. Sadly, outside of Stone and Thompson, there is not much else; I enjoyed with the film.

On the one hand, I expected the film to be in the vein of The Devil Wears Prada, but the writers take it somewhere else and fail to nail the landing. I understand the dark and broody atmosphere that director Craig Gillespie was going for. Still, too often, he shifts the tone back to something light. The shifting of styles affects the overall tone of the all and causes the running time of 135 mins to feel almost like three hours. There were moments in the film where I dozed off or checked my watch.

Furthermore, the usually reliable Paul Walter Hauser is a waste as Horace as is Joel Fry. Both men do not have much to do, which is sad as both have capable acting talent. One of my favorite villain actors, Mark Strong, is also only here for a paycheck, and it shows with his performance.

While this is a Disney film, I would caution parents of younger viewers. Cruella is not a light and happy movie. While I did chuckle at some moments, there was never a hearty laugh. The potential was there for a good movie. While I will give credit for a few of the twists, in the end, Cruella is another scar on Disney’s live-action adaptations.

Cruella will release simultaneously in theaters and on Disney+ with Premier Access for a one-time additional fee on Friday, May 28