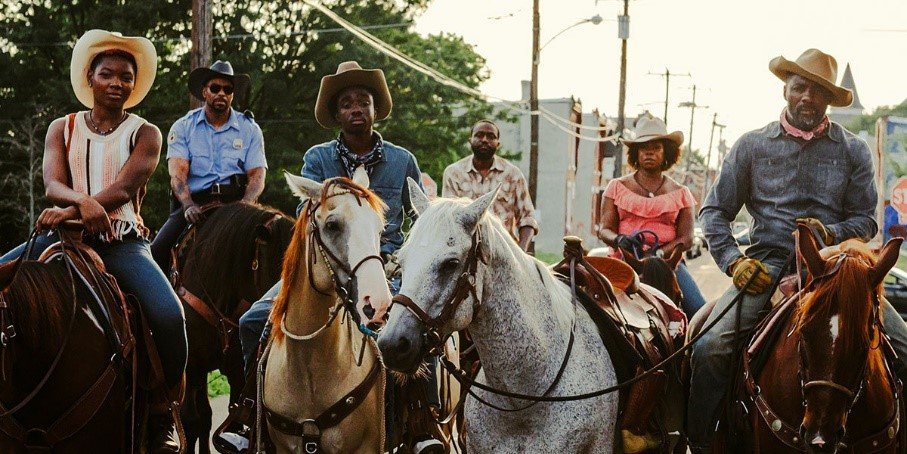 Greg Neri’s novel Ghetto Cowboy receives a big-screen adaptation in director Ricky Staub’s Concrete Cowboy. The film opens up in New Jersey and introduces us to Cole (Caleb McLaughlin) amid disciplinary action for his latest school fight. Cole’s fed up mother realizes she’s in danger of losing him to the streets so she sends him to live with his father, ex-con Harp (Idris Elba), in North Philadelphia.

While he is now a changed man and invested in being a black cowboy, Harp hasn’t seen his wife or son in years, and Cole isn’t too keen on a family reunion. To his dismay, Cole discovers a horse in his living room and decides to leave. Eventually, Cole connects with childhood friend Smush (Jharrel Jerome), a drug dealer. Over time though, the DNA of being a black cowboy starts to emerge in Cole, and the young man must decide if he wants to run the streets with Smush or mend his relationship with his father.

The film draws inspiration from the real Fletcher Street Stables Urban Riding Club in North Philadelphia. Concrete Cowboy follows a template we’ve seen on screen before; thankfully, first-time director Ricky Staub has a talented cast elevating the film’s familiar tropes. Idris Elba has always had a demanding screen presence. Even in the most mundane of scripts, you will get a quality performance from the British actor. Elba portrays Harp as a man running from the past while living in the future. Being a father myself, I understood Harp’s motivation and the reasons for his actions toward Cole.

As someone who had a nonexistent relationship with his birth father, I was able to identify with the anger Cole had towards Harp. Primarily known for his work on Stranger Things and portraying a young Ricky Bell in The New Edition Story, McLaughlin does a fine job as Cole. The talented teen actor taps into the awkward years that all boys grow through, where you think you’re grown and your father has to snap you back in reality.

I’m looking forward to seeing what McLaughlin does with his acting career as he continues to mature. Fresh off his Emmy for his portrayal as Korey Wise in Netflix’s When They See Us, Jharrel Jerome has the only other show performance in the film as Smush. Jerome gives Smush a sense of innocence and who, in his own way, wants the best for Cole. The film’s meat is in Cole’s relationships with his father and Smush (Jharrel Jerome). However, the movie’s supporting cast includes Method Man, Lorraine Toussaint, and Byron Bowers, as comic relief, who are all good.

However, this brings me to the biggest problem in Concrete Cowboy. The purpose of the real Fletcher Street Urban Riding Club is African Americans teaching potentially troubled children to ride and care for horses as a way of avoiding the temptations of the streets. There’s a great scene where a young boy on a city bus sees the characters of Cole and Harp on horseback. The child’s smile at the spectacle is still stuck in my mind a week after viewing the film. I would’ve loved if director Ricky Staub and his co-writer Dan Walser focused more on that aspect.

Some of the Concrete Cowboy’s best moments involve the history lessons of Black Cowboys told by Byron Bowers. I was also fond of the scenes involving Fletcher Street’s real-life members in cameo appearances. Originality in movies is rare these days, so there is a small part of me that wishes the director had solely focused on Fletcher Street, with Cole as an underdog character while eliminating the secondary drug dealing storyline. I can count on only one hand the amount of predominately Black cowboy films I’ve seen on screen since entering the world in 1981.

Nevertheless, I do recommend Concrete Cowboy off the strength of our two lead performers. I hope that Hollywood takes note of the yearning to see more black cowboys on the big screen.

Concrete Cowboy will premiere on Netflix in 2021