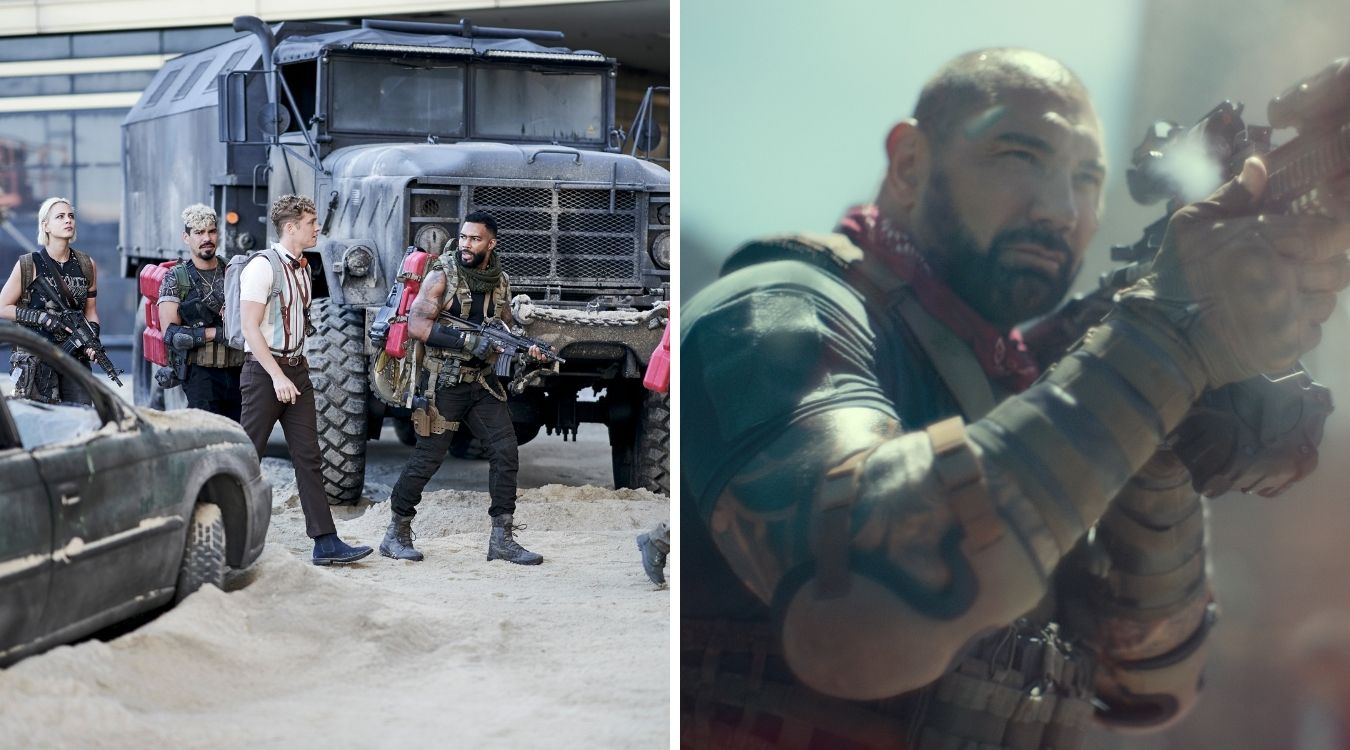 Director Zack Snyder unleashes his latest fanboy dreams in Netflix’s Army of The Dead.  After a zombie outbreak, Las Vegas is in shambles. This leads a decision from the government to barricade Sin City from the rest of the world.  On the outskirts of Vegas, former zombie killer Scott Ward (Dave Bautista) is in a dead end job flipping burgers and is estranged from his daughter Kate (Ella Purnell).  As fate would have it, Kate works at a quarantine camp.

One-day casino owner Bly Tanaka (Hiroyuki Sanada) and his associate Martin (Garret Dillahunt) about a job to steal over $200 million from his casino vault before the military destroys the city with a tactical nuclear strike. Ward agrees and first recruits his former teammates Maria Cruz (Ana de la Reguera) and Vanderohe (Omari Hardwick).

On the recommendation of Maria Scott, also recruits helicopter pilot Marianne Peters (Tig Notaro), Mexican sharpshooter Mikey Guzman (Raúl Castillo), who brings along his associate Chambers (Samantha Win). Last but least German safecracker Ludwig Dieter (Matthias Schweighöfer) joins in the fun.  After some training the group sets off on their mission, but as you know things are never what they same and of course mayhem ensures.

Following the positive response of Zack Snyder’s Justice League, I was curious to see what the director was going to do next. I do recall hearing about Army of The Dead a few months back, but all of the press surrounding Zack Snyder’s Justice League overtook the presence of his latest film.  Sans Sucker Punch I have been a fan of Snyder since his 2004 remake of the horror classic Dawn of the Dead so I was looking forward to his return to the zombie genre.

Snyder wastes no time in setting his plot in motion by utilizing a throwback approach to explain how the zombie outbreak occurs.

From there we are immediately thrust into the action watching Scott and his team kill zombies. The opening zombie kills come straight out of a video game and highly favor Snyder’s trademark style of directing when it comes to action sequences. However this time around Snyder serves as his own cinematographer and is having fun wearing multiple hats. In addition, this is Snyder’s first film shot digitally and the style reflects.

Dave Bautista continues his rise to action star with the role of Scott. One of the things I enjoyed about Bautista in the role of Scott is the lack of jokes. While Bautista displayed great comedic timing as Drax in the Marvel Cinematic Universe and last year’s My Spy, I liked seeing him serious as a man focused on his mission.  In addition, he had great chemistry with Ella Purnell whom portrays his estranged daughter.  The rest of the cast has there moments to shine each getting a chance to show off the skill set their character has. This includes the actors killing numerous zombies, utilizing martial arts, guns and saws.

For the most part, I enjoyed Army of The Dead however per the norm there are some issues. I didn’t particularly care for the ending arc involving a certain character, viewers will know the moment when it arrives. Furthermore while Zack Snyder’s Justice League running time of four hours never felt long, the 2 ½ hour time for Army of The Dead feels overdrawn.

Nevertheless, the Army of The Dead is another winner for director Zack Snyder and I’m looking forward to returning to this universe with the prequels Army of Thieves which will focus on German safecracker Ludwig Dieter (Matthias Schweighöfer) and the anime Army of the Dead: Lost Vegas which will delve in Dave Bautista’s Scott character.

Army of The Dead is streaming on Netflix tomorrow 5/21 and showing in Limited Theaters as well.