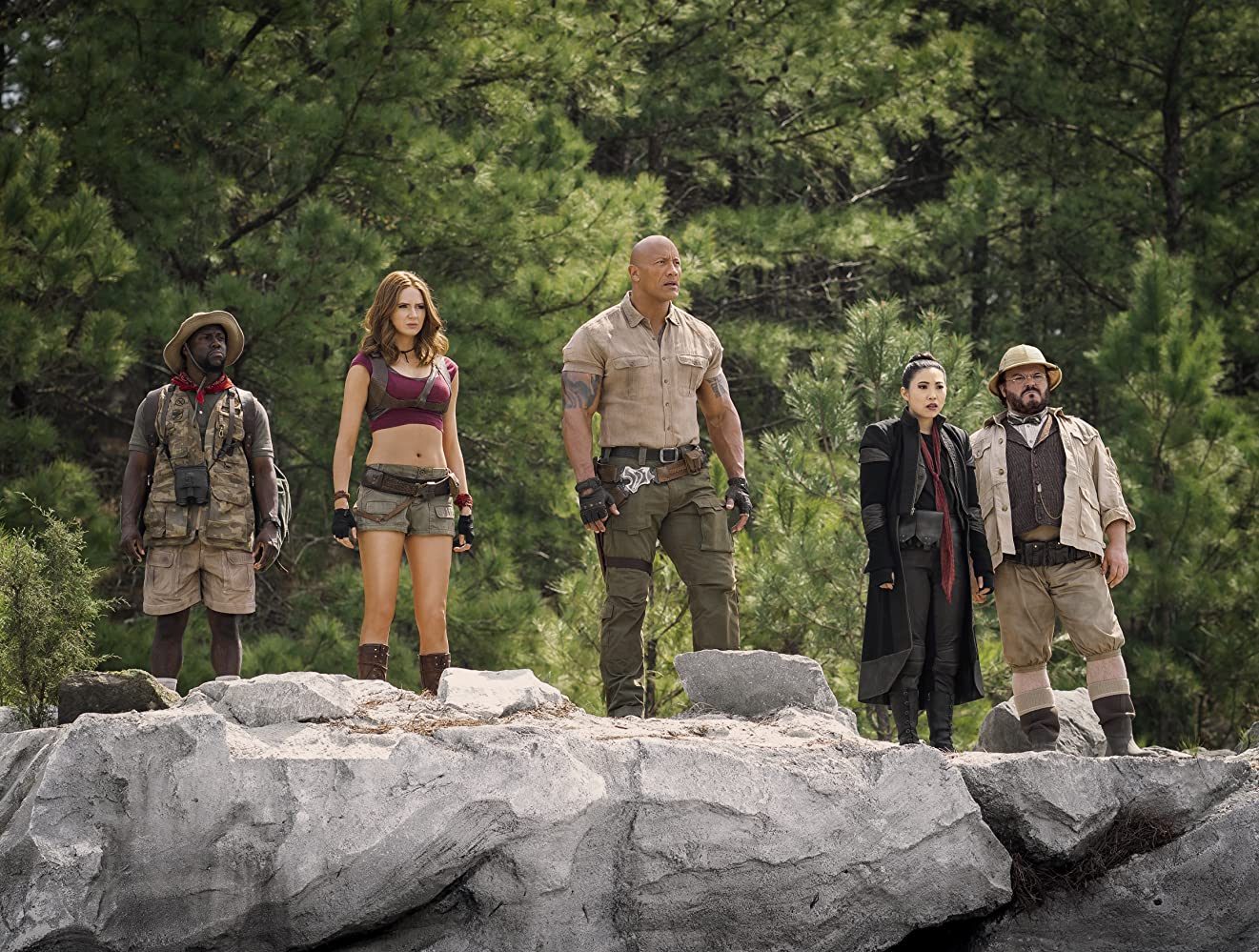 Another fun time in Jumanji

Director Jake Kasdan reunites with his cast from 2017’s Jumanji: Welcome to the Jungle in Columbia Picture’s Jumanji: The Next Level. Three years have passed since Spencer Gilpin (Alex Wolff), Anthony “Fridge” Johnson (Ser’Darius Blain), Martha Kaply (Morgan Turner), and Bethany Walker (Madison Iseman) had their adventure in the world of Jumanji.

As it often happens in life, the quartet of friends drifted apart during their time at different colleges. Making plans to reunite at a brunch in their hometown during Christmas break, things don’t go as planned when the overly depressed Spencer doesn’t show up. Sensing something is wrong with their chum, Fridge, Martha, and Bethany decide to go to Spencer’s home for a wellness check. Upon arriving, the trio is greeted by Spencer’s grandfather Eddie (Danny DeVito) and Eddie’s estranged friend Milo (Danny Glover). Upon further investigation, Fridge, Martha, and Bethany realize that Spencer has gone back into the game, and they decide to rescue him.

However, during the start-up of the game, there’s a malfunction. The error results in the transportation of only Fridge and Martha along with Milo and Eddie. The glitches don’t stop there as sans Bethany, who is still Ruby Roundhouse (Karen Gillian); the avatars are all mixed up. Fridge is now Professor Sheldon “Shelly” Oberon (Jack Black), Eddie is Dr. Xander “Smolder” Bravestone (Dwayne Johnson), and Milo is Franklin “Mouse” Finbar (Kevin Hart). The group then sets out to find Spencer, while also dealing with new antagonist Jurgen the Brutal (Rory McCann).

The third film in the Jumanji franchise, 2017’s Jumanji: Welcome to the Jungle, was initially met with skepticism by fans with the franchise upon its announcement. However, once it was released, most doubters understood that director Jake Kasdan had a love of the source material and made a threequel, which not only added to the charm of the first film but success as a standalone movie.

For the follow-up, Kasdan reunites with Jumanji: Welcome to the Jungle screenwriters Jeff Pinkner and Scott Rosenberg. Avoiding the pitfalls of cash-grabbing or repeating elements from the previous films that most fourth films in these series falls into, the trio continues to elevate the story. The addition of the new characters Milo and Eddie allows for many comical hijinks. Dwayne Johnson and Kevin Hart utilize their natural comedic screen presence to portray video game versions of Danny DeVito and Danny Glover. Hart’s impersonation of Glover is spot on and kept a smile on my face the entire time.

The rest of the cast is also enjoyable. Jack Black stole the previous film as Bethany’s avatar Professor Sheldon “Shelly” Oberon. In that film, Black had to portray a popular beauty queen, and in this entry, he has to represent an African American jock. One of the things I credit to Black’s performance as Fridge’s avatar is the avoidance of stereotypical “black” jokes. Instead, Black portrays Fridge as a fish out of water.

I also commend the writers for Spenser’s avatar choice (which I won’t reveal here). The avatar choice for Spencer adds depth to Spencer’s real-world arc of loneliness and is one of the highlights of the film. In terms of direction, Kasdan continues to improve. Known primarily for his comedic work, Kasdan creates numerous impressive action set pieces. One of the best set-pieces is a dune buggy chase through the desert.

My only gripe with the newest entry in the latest Jumanji film is the marketing ruined the return of Nick Jonas’s character Jefferson “Seaplane” McDonough, as well the avatar that Bethany eventually becomes. I also wasn’t too fond of the big bad Jurgen the Brutal, as the character is pretty one-note.

Jumanji: The Next Level is a welcome addition to the series franchise. With hilarious performances from its cast, skillful direction, and a few plot twists, it’s a perfect holiday entertainment.