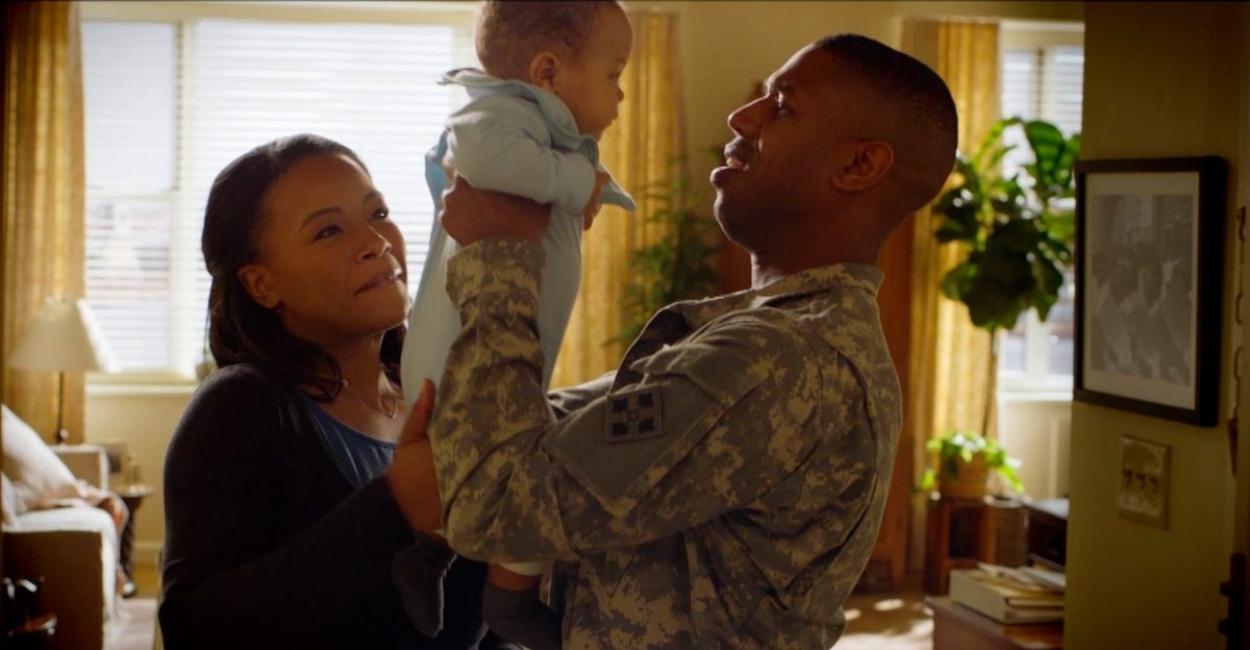 Denzel Washington directs Michael b. Jordan and Chanté Adams in the sentimental A Journal For Jordan

For his fourth film as a director, legendary actor Denzel Washington helms an adaptation of a New York Times bestseller in A Journal for Jordan from Columbia Pictures. A Journal for Jordan is based on a period in the life of First Sergeant Charles Monroe King (Michael B. Jordan), a soldier deployed to Iraq who begins to keep a journal of love and advice for his unborn son. Back at home, senior New York Times editor Dana Canedy (Chanté Adams) revisits the story of her unlikely, yet life-altering relationship with King and his enduring devotion to her and their child. Virgil Williams pens the screenplay for the true story, which takes inspiration from Dana Canedy’s article From Father to Son, Last Words to Live By.

A Journal for Jordan introduces use to Dana in 1998, grooving to some nineties R&B with Adams full of Black Girl Magic, as she visits her parents (Robert Wisdom and Tamara Tunie). Naturally, her parents are up in Dana’s business and wonder why she doesn’t have a man, which Dana continues to brush off. The next day, Dana meets Charles, a career military man who served with Dana’s dad. The two are instantly attracted to one another and begin a friendship that gradually turns into a romance.

I don’t want to spoil the relationship between Dana and Charles, but I will say that the chemistry between Michael B. Jordan and Chanté Adams is naturally organic. While the two have their differences, part of the film’s charm is how the duo falls into the characters. Adams is no stranger to Black Love Stories. She was a highlight in last year’s excellent The Photograph. In the role of Dana, she eludes confidence as we go on her journey of a successful writer, daughter, girlfriend, and eventually mother. Hopefully, A Journal for Jordan is her breakout role as she deserves it.

Regarding Charles, Michael B. Jordan steps away from his usual movie star “persona” and delivers his best acting job since Fruitvale Station. The character of Charles is confident but lacks sophistication, which sometimes happens when being a career military man. As my readers know, besides being an Air Force veteran, I’m also the son and grandson of two career Army vets. Watching the minor qualms of Jordan’s character reminded me of my grandfather and many men I served with. Jordan portrays a military man with ease, so much so, that you would think he was a vet.

I also want to commend screenwriter Virgil Williams for handling the film’s military aspects. There is the wonderfully accurate and honest scene of the duties of a First Sergeant where Charles has to miss a date with Dana due to military commitments. My mom was a “Top” during her Army Career, so Dana’s feelings took me back to my teenage years. Another honest scene is the importance of having a Will and to have your house in order because there is no promise of tomorrow for anyone.

Denzel Washington keeps the two-hour-plus running time moving along at an incredible pace. We immediately invest in Charles and Dana’s relationship to see how it will play out. When the tween Jordan (Jalon Christian) appears, you also support him and want to see him learn the truth about his dad.

There are a few tear-jerking moments in the film, but the emotions are natural and never forced. As a director, Washington earns tears from his audience. While I highly doubt the film will qualify for any awards, there is an honesty and beauty found in A Journal for Jordan. As a vet, husband, and father, A Journal for Jordan hit home for me with its messages on all three issues. That said, even if you don’t fall into one of those categories, I still highly recommend checking the film out this holiday season.

A Journal for Jordan opens on Friday, December 24th.